When I was a kid I looked forward to those November afternoons when my daddy would plant me on a bucket under a holly tree in the Tulip Creek-bottom near my grandmother's house in South Arkansas. I loved sitting there with him - and by myself as I got older - watching the forest as the day slowed and the darkness advanced. Our objective, of course, was to spot a whitetail deer that we could shoot - and if we were really lucky, perhaps even hang on the wall. I always knew that "the action" would keep getting better right up until we had to call it on account of darkness. If you've ever hunted deer you know that the early morning and the late evening are the best times. The good action in the morning comes at the beginning and then fades off toward the middle of the day. In the evening, however, it just keeps getting better and better. Any second, that buck of a lifetime could step out.... or it could just get too dark to see and it would be time to head in for supper.

A few days ago I took a late afternoon drive near my home in North Texas. I knew the conditions were perfect for spotting deer so I headed down Bear Creek Road as the light began to fade. I staged my camera in the front seat of the truck beside me with the 300mm f/2.8 lens and the ISO cranked up to 3200. I wasn't really looking for a wallhanger photo - just something to illustrate whatever story might get told.

Bear Creek Road is one of those unique places that feels a lot farther from town than it actually is. As the crow flies I was probably no more than a dozen miles from the Interstate 820 Loop around Fort Worth. But the quiet makes you think you're in the middle of nowhere. I saw a few deer out in the fields - but nothing unusual. I turned around after a couple miles and started back knowing that I would re-enter civilization just after dark. I had no idea that it was about to get better and better.

Deer were running everywhere. Several crossed the road in front of me. This first one was running along the road to my left. 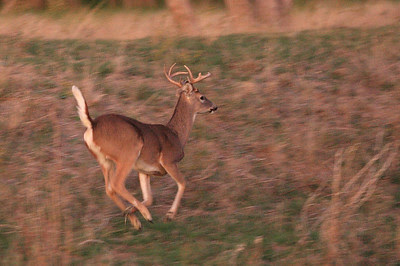 I looked farther ahead and saw another nice buck that had been with the group that crossed my path - so I panned along with him and got some nice broadside running shots. Here's a couple of favorites: 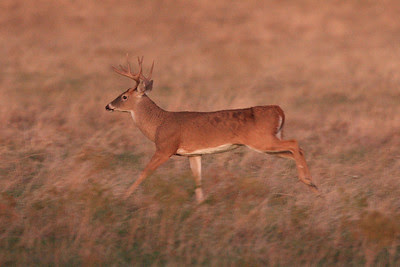 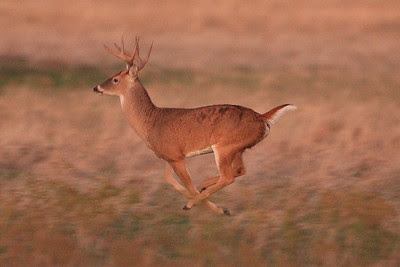 One thing I've learned over the years is that if you see a group of deer crossing a road you should look behind them to see why they're crossing. Sure enough, off to my right was another buck pushing the herd - not a huge buck but certainly worth photographing in the waning light. 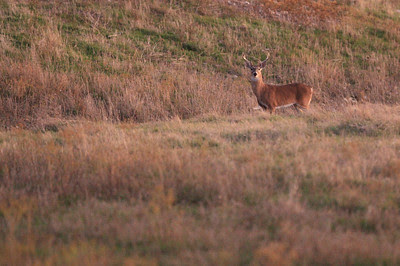 I was really enjoying all the bucks when something caught my eye far out in the field to my left. I pulled up the binoculars and was stunned to see two bucks going at each other in what looked like the ultimate death-match. According to the EXIF data on the photograph, it was 5:42pm. Here's one of my first shots of the pair.... 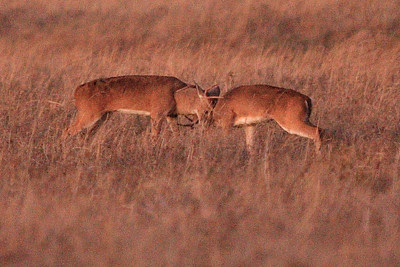 At ISO 3200 the camera was straining for enough light to see the deer. The lens was wide open and the shutter speed was down to 1/100th of a second. The photo you see above is cropped from a much larger image as the battle raged on about 125 yards from my rolling truck-blind.

The two beasts pushed and shoved each other for at least ten minutes never once letting go. At 5:50pm I took my last photographs with a shutter speed of 1/13th of a second. It was almost dark and the camera was no good any more. I kept watching through the binoculars until I completely lost sight of them in the spreading darkness. In this next shot you see the bluriness that comes from a slow shutterspeed and the graininess that comes from high ISO. 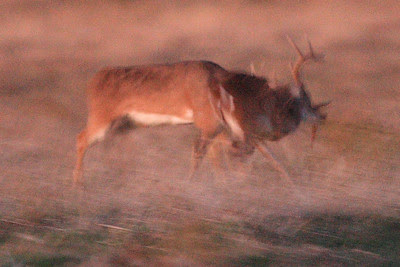 The two bucks were locked together the whole time I was watching. The larger one pushed the other one around an area about half the size of a football field. This was not a friendly encounter. It was clear that the larger one was trying to kill his adversary. By the time I lost them in the darkness I was convinced that their antlers were locked together permanently and that they would both die of exhaustion. 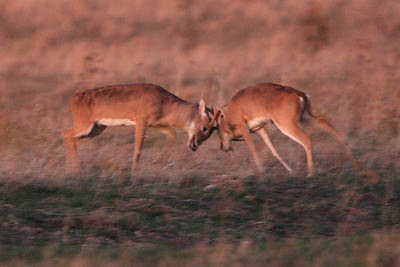 As I watched the bucks fighting, a car approached from the opposite direction and the driver stopped to see if I needed help. (Texans are like that, you know.) I told her there were a couple bucks locked together and she said she'd tell her husband when she got home; she was sure he would be interested. A few minutes later the husband showed up with a spotlight. Over the fence we went - he owned the place - and out through the field we searched for the bucks. I'm guessing it was a happy ending because we didn't find the bucks locked together and we did see a couple of bucks disappear into the darkness beyond the reach of our searchlight.

I've seen video of bucks fighting before but never before in person. It was epic - one of the most awesome things I've ever witnessed and getting to photograph it was a special treat. The only thing that might have made it better is if I could have had a bucket to sit on and a holly tree to sit under - next to my daddy.
Posted by James Albritton at 5:25 PM No comments:

I stopped by the Fort Worth Running Company to get some new running shoes this morning and as I came out I saw a sign pointing me to the Trinity Park Duck Pond. It's been a few years since I've visited the duck pond so I figured I'd stop in and check it out.

I was only there for a few minutes but it was a great reminder that if you want to hone your wildlife photography skills it sometimes helps to have slightly-less-than-wild subjects. The ducks at Trinity duck pond - and probably the ducks at the park in your town - are accustomed to having people around. That means you get lots of opportunities to work on your compositions in a very short period of time.

Here's one of my favorites. Not only does it show a great Mallard drake but it also reflects the local fall color. 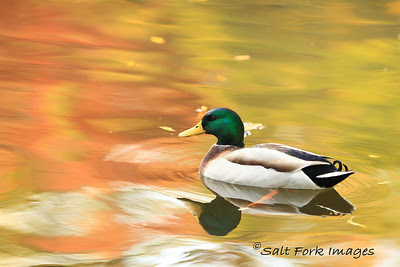 Posted by James Albritton at 9:35 PM No comments:

The Brazos Valley Hunt Club opened their 2011 season with a foxhunt between Rocky Creek and Mustang Creek. I was invited to record the festivities and the action again this year and I'm happy to share a few of the shots with you.

The hounds are ready. 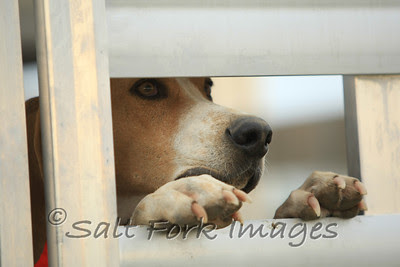 Everyone gets fancied up. 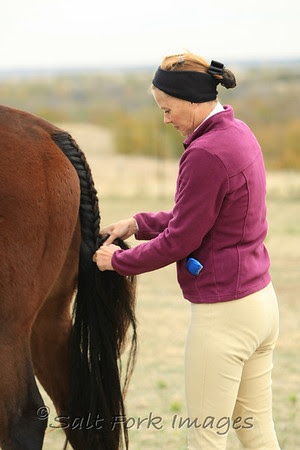 A blessing is given. 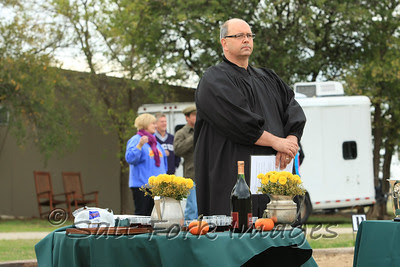 And the hunt is on! 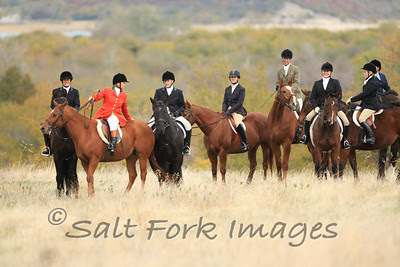 Here's one of my favorite action shots. 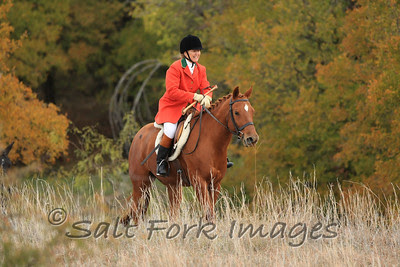 Everyone had a great time. Some even got a reward at the end. 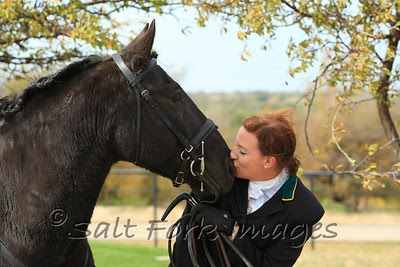 If you'd like to see more, just click on one of the photos and then again when the photo pops up. It will take you to the gallery on my website. Hope you enjoy!
Posted by James Albritton at 9:56 PM No comments: