We decided to take a day off from skiing today and do a little shopping and goofing off. We checked out some real estate in the north end of Teton Valley and then we had a little lunch at Milk Creek Grill in Driggs. Afterward we headed over Teton Pass to Jackson, Wyoming, where we took a sleigh ride in the National Elk Refuge.

The National Elk Refuge is located just north of the Town of Jackson and consists of almost 25,000 acres of valley floor where migrating elk spend the winter. As Jackson Hole was settled in the late nineteenth century, the traditional migration path of the elk from their summer range on the Yellowstone Plateau to lower valleys below Jackson Hole was cut off. The Refuge was established in 1912 to protect the Jackson herd and to provide a place where the herd could be fed through the toughest winter months.

The number of elk on the Refuge varies from year to year from around 4,000 to around 8,000 depending on weather and range conditions. Our sleigh ride started about 2:30pm with Steve at the reigns and Burt and Ernie in the harness. There were at least two other sleighs loaded with tourists on the Refuge at the same time. Here's a shot of one of the other groups. 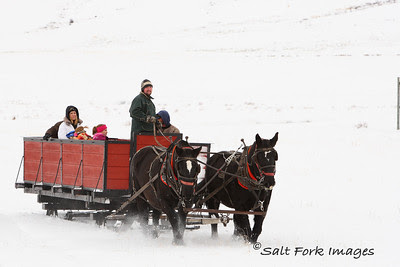 Our timing must have been good because a lot of the bulls were up and moving around. It was amazing to be so close to these majestic beasts. In some cases our sleigh passed within 20 feet of the wild animals without spooking them or distressing them in any way. Steve told us that many of these elk had been on the Refuge every winter for their entire lives and that they were very accustomed to the horses and the sleigh. He also assured us that if anyone were to get out of the sleigh then the elk would immediately leave the area. That would be something different (and spooky) for them.

Photographing these elk was a treat for me. First, as many of you know, I love to hunt. I have never hunted elk before and this experience only served to reinforce my desire to do so. Second, I love to photograph any kind of North American game animal. The elk is such a majestic creature and these bulls are the epitome of the species. And third, shooting in the snow is a special kind of challenge. The light meter built into the camera sees a lot of white that it wants to make into gray. It tries to close itself down and in the process it turns these beautiful snowscapes into the dreariest of scenes. Every shot had to be overexposed by at least one and a third stops. If it was a wide shot with mostly snow then it was overexposed by two full stops to make it work.

If you are ever in Jackson Hole in the winter, I highly recommend the National Elk Refuge. I hope you enjoy my photos. 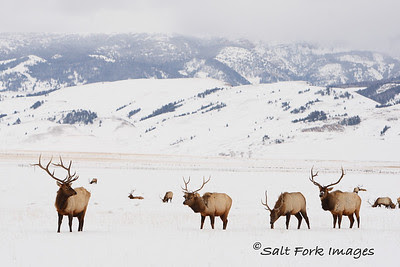 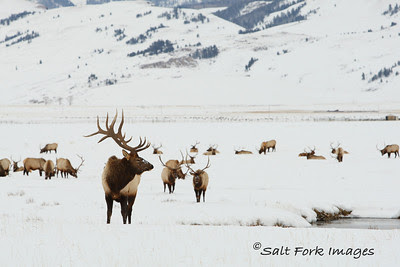 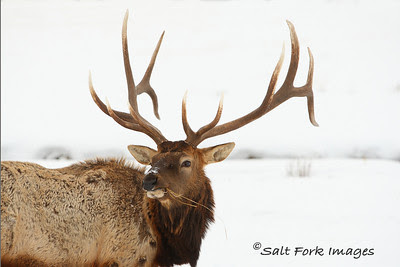 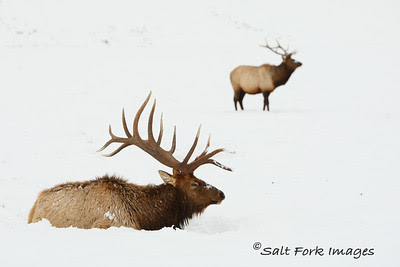 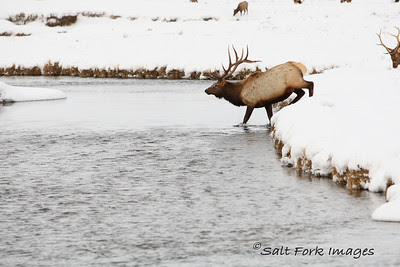 The Aledo Bearcats won the Texas 4A Division II State Championship with a 69-34 victory over the LaMarque Cougars at Cowboy Stadium in Arlington. Johnathan Gray rushed for 326 yards and eight touchdowns behind an outstanding offensive line while the defense held LaMarque to only one score in the second half. The win capped an undefeated 16-game season.

I was on the sidelines as usual but the big difference for this game was the number of people down there with me. At times it was frustrating to not be able to even get a view of the action. I did end up with a few good photos and I'll post some here for your enjoyment. Click on any of the photos and it will take you to the complete gallery.


J. Gray breaks one for a touchdown. 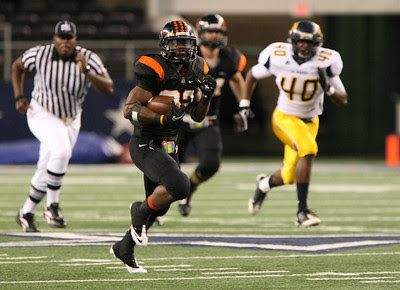 Hunter Powell trips up a Cougar 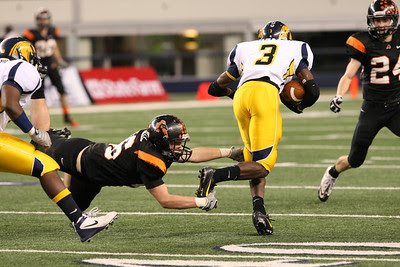 The Cheerleaders and the Band loved being in Cowboy Stadium. 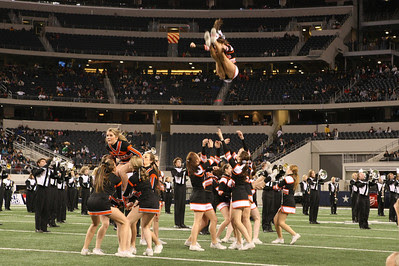 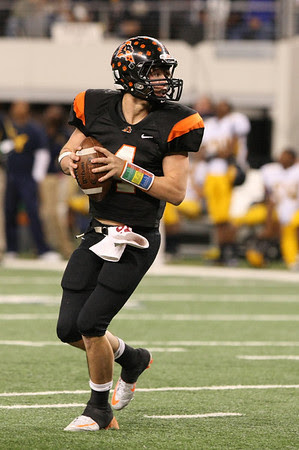 The end of a PERFECT SEASON! 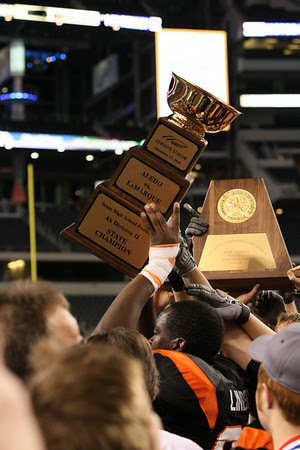 Posted by James Albritton at 10:20 PM No comments:

Now that football season is winding down, basketball is my new favorite sport to shoot. I'll be shooting the Aledo Bearcats and Ladycats again this year and I think I may finally be getting the hang of it.

Let me just give you some "how-to" here and then I'll share a few of my recent shots.

Lighting is the biggest technical issue in shooting high school basketball because most gymnasiums are horrible. There is either too little light or the light cycles in a way that makes consistent white balance impossible...or both! I've been in a lot of gyms and you just never really know what to expect.

If you want to stop the action you need a fast shutterspeed. A speed of 1/400th of a second is about the slowest speed I would accept for reasonably sharp action shots. (If you plan to print photos very large you'll want even faster speeds.) For fast shutterspeeds you will need to open up your lens (f/2.8 if possible) and raise your ISO. Of course, large apertures mean shallow depth-of-field and high ISO means digital noise. (If these concepts don't make a lot of sense to you, consider reading my series of postings about TRADEOFFS from early 2008.)

But what do you do if there isn't enough light even when you crank up the ISO and open up your lens? Try some flash!

I use a couple of AlienBee 800's triggered with a hot-shoe-mounted remote transmitter. These are studio flash units capable of lighting an entire gymnasium. I mount them on light stands and plug them in on the top row above the home spectators. I can then set my ISO to 1600 (reasonable digital noise), my f-stop to 5.6 (reasonable depth-of-field), and my shutterspeed to 1/250th of a second (which doesn't really matter because the flash duration is about 1/5000th of a second.) And, by the way, the color from the AB's is very consistent. White balance becomes a lot easier.

So much for the technical stuff. How about technique?

I like to shoot from down low to make the players look taller. I prefer to position myself on the floor along the baseline about halfway between the basket and the corner of the court. This gives me a good view of players coming down the court and of the action under the goal. Watch a college basketball game and look where the photographers are along the baseline. It's a great place to be and occasionally you get taken out by a flying player! Be careful. It's also a great place to witness the "other side" of the game. The refs have a lot more fun out there than you think.

I have two lenses that I like to use: the 70-200mm f/2.8L and the 24-70mm f/2.8L. The 70-200 gives me the ability to zoom in on the players coming up the court as they dribble and pass. I usually shoot part of the game with that lens and then switch to the 24-70 to capture more of the action under the basket. The wider lens allows me to capture the full height of the action from the floor to the basket.

Check out these examples. I LOVE BASKETBALL! 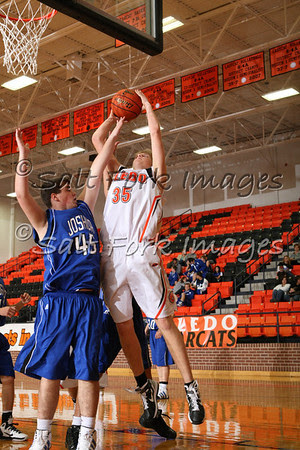 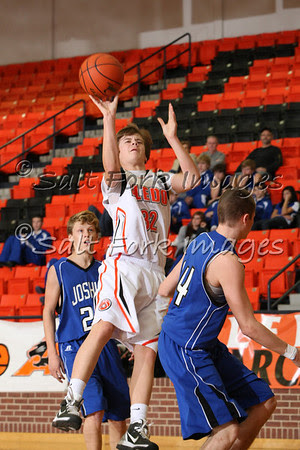 One more thought: If you don't have strobes or high ISO capability or fast lenses, you can still get cool basketball shots. Look for opportunities when the action slows down. Here are some examples. 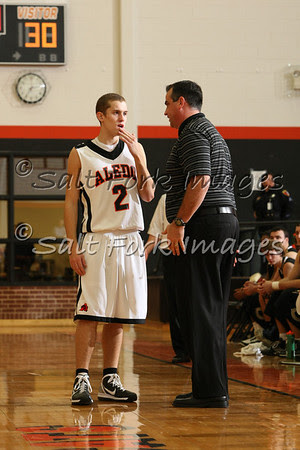 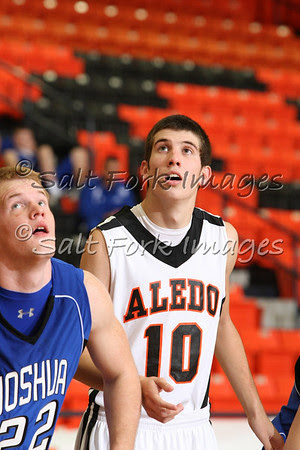 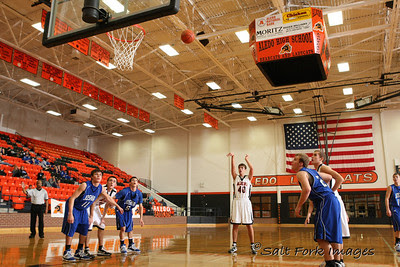 Let me know if you have any questions. You can reach me at jalbritton@mesh.net.

- James
Posted by James Albritton at 11:48 PM No comments:

The Aledo High School Bearcat Football team has advanced to the Texas 4A Division II championship game for the second year in a row. They won it last year against Brenham down in Austin at the University of Texas' Darrell K. Royal Stadium. This year the Bearcats will take on LaMarque High School at Cowboys Stadium in Arlington. It should be a great game. Good luck Bearcats!

Here are some shots from the last few weeks. 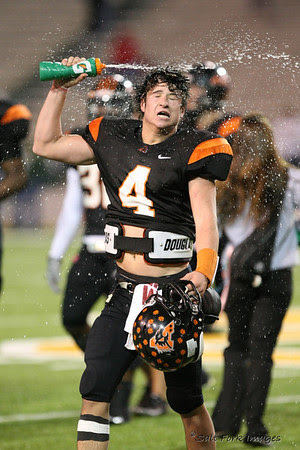 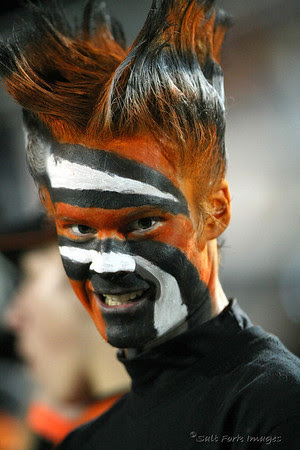 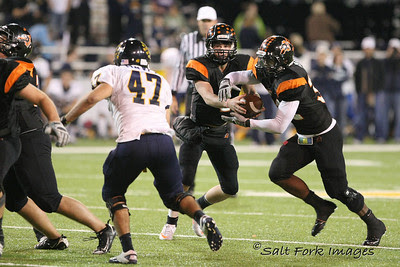 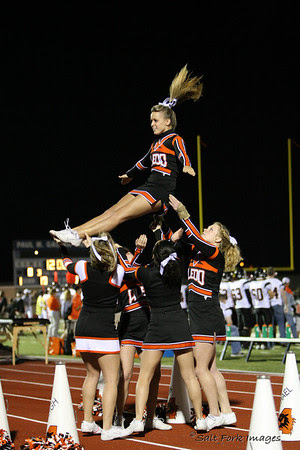 Posted by James Albritton at 8:51 PM No comments: