I am still alive.

It's been almost six months since my last blog entry. Part of that is because I have been incredibly busy with new jobs and part of it is because I just haven't had much to say. The more I've thought about what photography lesson should come next, the more I have realized that THERE JUST ISN'T THAT MUCH TO IT!

Learn how to use your equipment; learn what shutterspeed, aperture, and ISO do for you; and then get out there and shoot. Think about the suggestions I've given on composition and then go try them. It's really that simple.

Now a little about what's been happening in my world:

We spent seven weeks in Idaho and got back to Texas about the 10th of August. I made a trip to Utah in October to hunt muledeer with my dad and then I took the family back to Idaho for Christmas. Now it's January and we're back in the swing of things with life as normal as it ever gets for us.

Last August I took a job with the local newspaper in Aledo, The Community-News. I became their official sideline photographer for high school football and volleyball season. Things went so well that we've extended our agreement for basketball and soccer seasons. I shoot at least one game per week - but usually five or six if I can make it. I still sell prints to parents while making all my shots available for use by the newspaper. It's been a lot of fun. If you like sports photos, you should probably check out my favorite sports shots on my Smugmug website (www.SaltForkImages.com)

In November, I started another new job as a teacher at Aledo Christian School. I teach Geometry, Pre-Calculus, and Calculus two days per week and I love it. Aledo Christian is a small private school; the kids are great and, well, who wouldn't love getting to teach Calculus!

Besides all the sports photography, I've also started doing some High Dynamic Range Imaging. HDR Imaging is a great way to capture the broadest range of light possible in your photographs. I've attached one below that might look familiar to you. Last July I posted about "getting in a rut," and shooting the same places over and over. I talked about how fruitful that can be when you factor in potential changes in lighting due to time of day and/or weather. It turns out that in that last session at sunset in Grand Teton National Park, I shot several shots with different exposures without moving my tripod. THAT'S EXACTLY WHAT YOU NEED FOR HDR! WHAT AMAZING LUCK! I hope you like the result. It now qualifies as my official all-time favorite photograph. 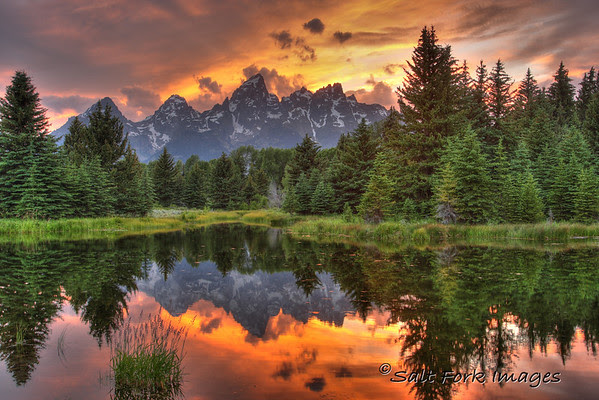 -James
Posted by James Albritton at 11:11 AM No comments: